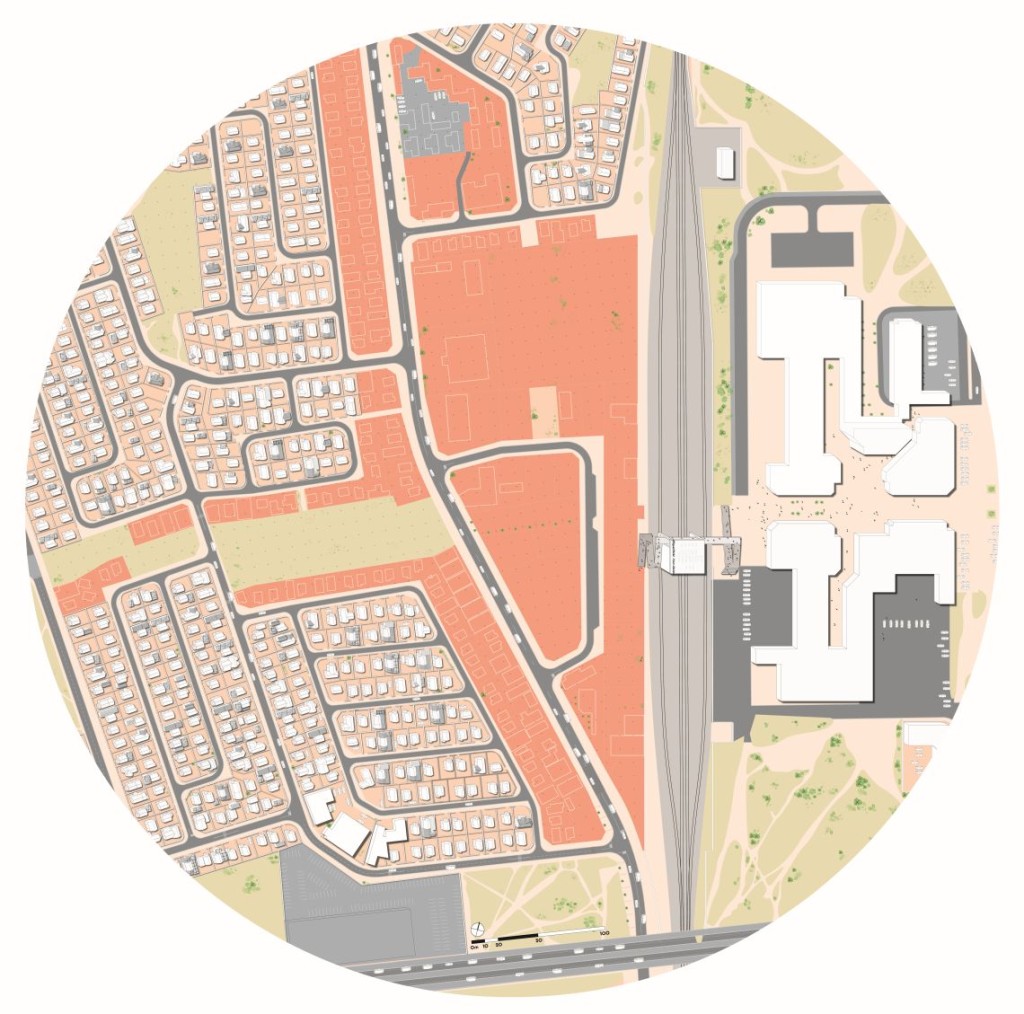 Dutch organisation, Play the City kicked-off the Serious Gaming Festival at Department of Design. A series of sessions showing how city planning and problem solving can be conceptualised through gaming it included a workshop by serious games maker Tygron and a keynote from Ranj’s Marcus Vlaar.

The subject of focus for the Play the City workshop was the central business district of Khayelitsha, South Africa’s second largest township. Khayelitsha represents a unique case due to its virtual lack of urban planning, public amenities or a city centre.

Despite over 400,000 people living within its borders, the district faces resource shortages, a lack of formal businesses and a severe dearth of public transportation to Cape Town’s central business district 37kms away. Therefore the question posed to gamers today was: How can Khayelitsha develop its city centre?

A series of players gathered around a large, circular board in the middle of the table, which depicted an aerial view of Khayletisha’s central district. Each player was assigned one unique role from the choices of: designer, land owner, NGO, street vendor, investor, developer, facilitator, planning department, local resident, small business and council member.

Each actor was assigned a specific amount of currency that they could use to buy ‘resources’ ranging from a skills training centre to a parasol container to a shebeen.

It was intended for each player to debate and negotiate with other actors around the table by putting forth personal interests and visions for how Khayelitsha could develop. After every 15 minutes, players came together to pitch their ideas to the rest of the gamers, and a period of negotiation would follow.

Proposals for development initiatives ranged widely. Local residents and small business owners worked together to lobby for the informal traders; whereas the developer and city planning department pushed for more industry development and formal housing blocks. Issues relevant to Khayelitsha often emerged during discussions; a range of actors across the board pointed to the severe lack of skills training, a lack of adequate housing, the district’s inability to attract industry and the lack of the private sector.

It appeared that overall, every actor had the same end goals in mind. Yet, how exactly to arrive at these goals through urban planning and development varied widely.

Interestingly, there were many times actors who were playing individual roles went out of character to represent their personal interests in real-life. For instance, one man whose role in the game was that of a landowner in Khayelitsha, acted out of his assigned character. He almost instantly offered his land away for low-profit development (including providing space for an urban farm and building a technical college), rather than holding out for highly profitable development opportunities, such as for industrial offices. These breaks in character were perhaps indicative of the types of people who were attracted to the engagement offered by the game, rather than the stakeholders that would be represented in real-life.

Once the game concluded, players reflected that conceptualising urban planning becomes much more fun and creative when transferred into a gaming scenario.  They said that it created a safe space for idea creation and innovation that is often lacking within actual governmental planning offices and investment firms. The reception overall was very positive and optimistic, suggesting that a game such as this could be used collaboration between sectors.

The game will return to South Africa in October when Play the City engages real-life, high-level stakeholders in play in Khayelitsha. The outcomes of this second session will be highly anticipated. 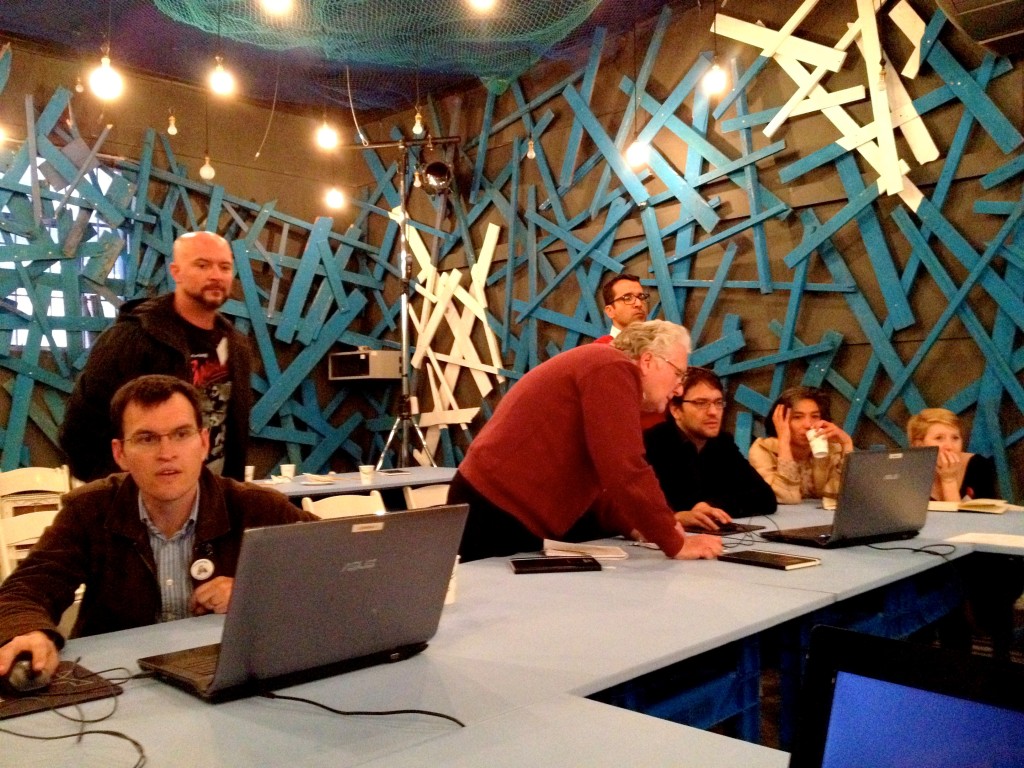 Tygron, a company that creates serious games for urban development, hosted the second part of the Serious Gaming workshop. Tygron’s products were created out of a need for city planners to be able to conceptualise development initiatives before they are put into policy.

The game they introduced integrates a Sims-like gaming platform with real-life indicators taken from GIS information systems and city datasets. Players are given a planning challenge and a certain time frame in which to complete it. They must heed real-life indicators such as livability, heat stress and population densities while staying within allocated budgets and real-life governmental regulations.

While the gaming models are not entirely accurate, they are accurate enough to allow stakeholders to have realistic conversations about long-term goals, while allowing them to explore the feasibility of these goals through the simulation.

To demonstrate the technology, the audience was divided into four teams at separate computers. Our simulation focused on developing land and resources around a university in Delft.

Each team was given a different actor role, including representing the municipality, the student housing association, the water board and university real estate. Each team had a unique goal they had to accomplish, while simultaneously having to negotiate with other teams who had competing interests.

Overall, every team faced frustration with the system and the intense backlogs and budget shortages that made achieving their goals extremely difficult. Three teams blamed the municipality (the fourth team) for being extremely slow to approve their development plans. In turn, the municipality was frustrated by how the other teams ignored many pre-existing regulations (such as sustainability requirements) that made approving developments difficult.

By allowing the audience to partake in rounds of game simulation, it provided us a first-hand look at how serious games can be used to work around real-life problems. It presented a compelling case for the continued use of such games to increase collaboration and debate between stakeholders.

As Tygron suggested, the best part of the game was the ability to restart and try again. By allowing players to always have the opportunity refresh and begin from a blank page, it prompted a degree of creativity and innovative decision-making that would otherwise be impossible. The concluding consensus was that change comes not through playing the game, but rather through creating it.

Marcus Vlaar, creative director at Ranj Serious Games, wrapped-up the Serious Gaming session.  He explained that the use of gaming is in one’s ability to arrive at new solutions and to reveal new problems that one may not have arrived at from more traditional methods of thinking.

Thus, the objective of serious games is to make illusions so realistic that they encourage creative strategies for real-life problem solving. “Playing a game is the voluntary attempt to overcome unnecessary obstacles,” said Vlaar.

During any game, a player is forced to invest time and effort in order to achieve a certain goal. If there is a balance between the difficulty of a challenge and one’s own skill level, then they will constantly be engaged with the experience, and will devote extreme attention to it.

Games offer a window of opportunity for a wide variety of fields, because they have the ability to attract an individual’s full attention while creating an important learning environment.  If learning by doing is the most effective way of doing something, then games provide huge opportunities.