CAPE TOWN (5 December 2017) The Netherlands Consulate General in Cape Town has hosted numerous soccer activations between 27 November and 3 December 2017 as part of the Volvo Ocean Race stopover in Cape Town. The events took place at the V&A Waterfront and included a week of KNVB WorldCoaches workshops, the Orange Cup Kids Tournament and a legends game between legends from the Netherlands and legends from South Africa,

“Whatever you do in Cape Town, you need to be mindful of the segregated past and its remnants in the present. Therefore, we wanted to combine this big sailing event with activations that would attract people who are not interested in boats,” said Dutch Consul General in Cape Town, Bonnie Horbach. “With a rap, hip hop and graffiti program combined with an Orange Cup for more than 200 children from all over Cape Town, we aimed to make the City bowl a bit more inclusive because that is what soccer does; it brings together people from all walks of life.”

The Royal Dutch Football Association (KNVB) and South African partners in association with the Dutch Consulate General organised -in the same week- the WorldCoaches Workshops which facilitated the training of 22 new coaches. On 1 December 2017, each coach was awarded a KNVB/SAFA certificate at the V&A Waterfront Amphitheatre, allowing them the opportunity to train youngsters in the Netherlands and South Africa. 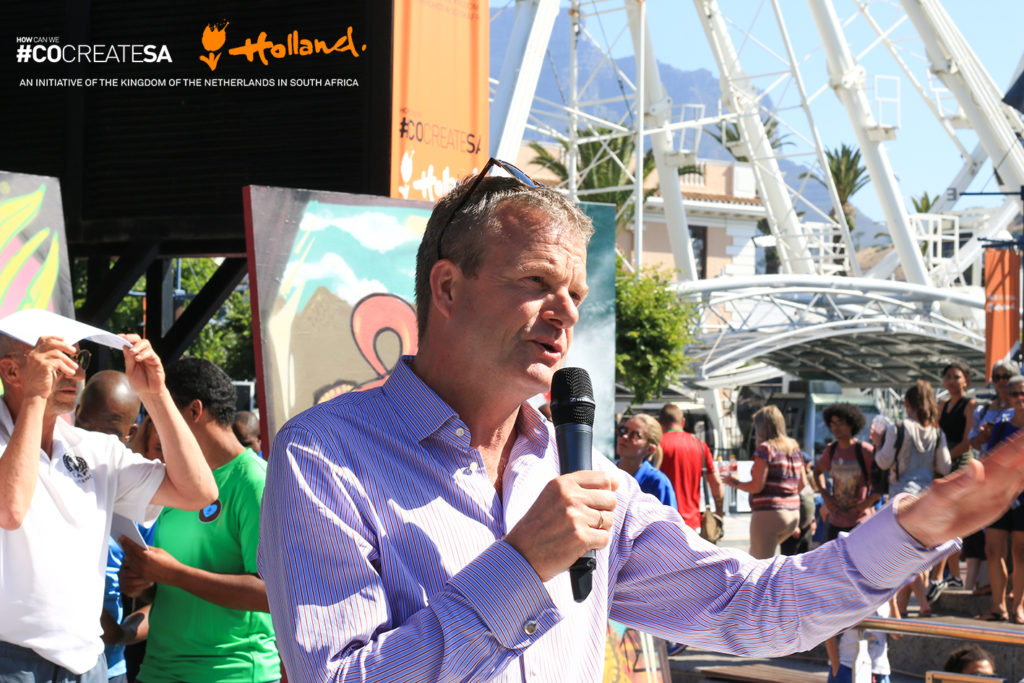 Director of Economic Diplomacy for the Foreign Ministry, Guido Landheer welcomes the WorldCoaches ceremony for the handing out of the certificates.

"The KNVB values positive, long-term relationships. South Africa is a country we share a history with. The Mandela 100 Project extends the value of our partnership with The Mandela Foundation and focuses on the development of the game in South Africa by assisting in the building of local capacity," said Johan van Geijn, Specialist in International CSR Partnerships for KNVB and WorldCoaches.

On 2-3 December 2017, an Orange Cup soccer tournament was hosted for 200 young players between the ages of 9- 12 and organised by Fives Futbol. Participating kids had the opportunity of playing mini-matches, being part of the speed shot competition with the legends and celebrating the winning team.

“In the past week, we’ve seen the forging of solid partnerships and the recording of tangible outcomes in the development of soccer in South Africa. I would like to thank the KNVB and all our partners for making this possible. The workshops, as well as the sports conference, has provided an opportunity to not only learn from another but to listen and find solutions together to the identified challenges that we face. This way of working reflects the mandate of our long-term campaign #cocreateSA and contributes to the success of South Africa and the Netherlands,“ said Claude van Wyk, Policy Advisor for Political, Economic and Cultural Affairs at the Netherlands Consulate General in South Africa.